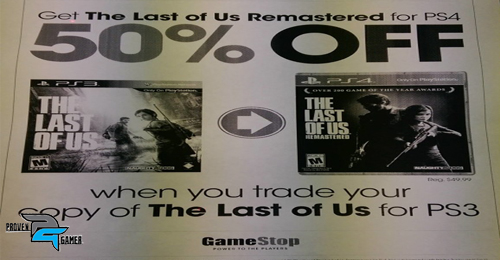 With the new remastered version of the popular game Last of Us” coming out on the PS4, people who bought the PS3 version are wondering if they can get some sort of deal. Well Sony flat out said “No”. However, GameStop has announced that they will be doing a deal for anyone who brings in their PS3 copy, they will get the new copy of The Last of Us for $25. There will be more savings if they are a PowerUp rewards member, the exact amount hasn’t been announced so you will need to find out for yourselves. Personally I think that the game deserves this remaster mainly because of its awesome gameplay but the kicker is the sales. The PS3 version sold 4.66 million copies globally and 1.94 million of that was in North America alone! The Remastered edition comes standard 1080p and 60fps as well as the Left Behind single-payer DLC. Now if I had a PS4, this would be an awesome deal.