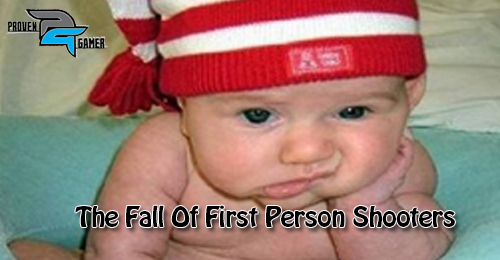 I remember falling in love with First Person Shooters as a kid.  Goldeneye and Perfect Dark will always be considered some of the great games to me.  The first couple of Halos were also amazing to me from start to finish. That being said, I cannot bring myself to play modern FPS’s.

FPS’s used to be greatly varied and imaginative. Weapons were vastly different and the stories were immersive.  Games like Duke Nukem and Jet Force Gemini kept me guessing as I went through and stayed entertaining throughout.  I regularly go back and play these older FPS’ and still enjoy myself.  I can’t bring myself to play even a small amount of any modern FPS.

I played Call of Duty: Modern Warfare when it came out.  It was a very fun game that I played for a substantial amount of time.  As the game became more popular, the online community changed.  Immature players that get more joy in trolling other players rather than play the game soon flooded multiplayer, killing any fun the game had for me. I tried playing just single player, but that gets very repetitive.

It was at this time that I found the main flaw with FPS’ today.  Every one of them turns into enemy appears, point and shoot, and repeat. There is no diversity and the story falls to the side.  How can you pay attention to the story when you are performing the same action over and over and over?  It really is only slightly better than button mashers.

This is a genre that would be fair to say is the most popular in the United States. This may be the problem with how these FPS games are coming out.  Because they have such high demand the quality of the game is not as important.  The developers know that the “new” FPS will sell, especially if it is part of popular series, and they rush it out with little to no real changes from the last one.  It is getting to the point will the market will get too big and crash.  This has happened before with other genres (arcade games, platformers, and early fighters to name a few) and will continue to happen.

To those who love good First Person Shooters, I would encourage you to play other genres of video games.  This may seem boring at first but it by playing other types, the demand for shooters will drop and better quality games will start to be made.  If that doesn’t happen, then at least you have a new genre of video game to enjoy while FPS’ turn to crap.