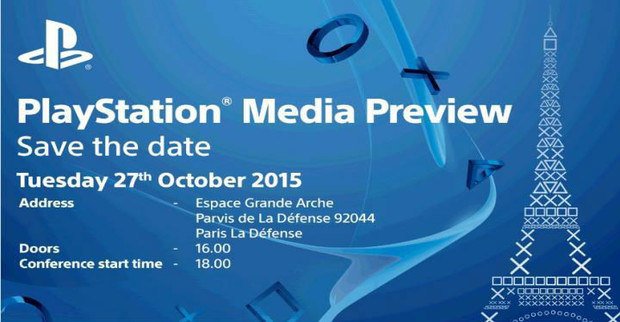 Hello boys and girls if you are a social media junky like some of us you already likely know it is Paris Games Week. Though if you have secluded yourself into a darkened disconnected room for the week until the air is free of The Walking Dead spoilers no worries we have you covered with some great updates. Want to check out some of the amazing that was Sony’s portion of the conference without having to scroll through the muck? We here at Structure have compiled some of the highlights you may want to check out. Plus we hate when good things get spoiled as well so we have kept this post spoiler free.

Fighting game fans got a taste of some of the blood of their opponents as two major titles released some updated information.

Capcom started off in grand fashion as Yoshinori Ono released some great content. Street Fighter V fans were treated to a glimpse of the new character Dhalism: which you can check out below.

Sadly a last minute leak rained on the parade so as to not be outdone Yoshinori Ono also announced some other new content. This reveal came in the form of post-launch DLC for Street Fighter V six unannounced characters will make their appearance in Street Fighter 5, freely available to download by all players. Last but surely not least we finally have a release date set for February 16, 2016.

Not to deviate from the course, Tekken next stepped up to spar in the ring while producer Katsuhiro Harada stepped on stage. It was revealed that Tekken 7 would be making its way from arcades to your home via Playstation. Coming as no surprise as all the other games in the Tekken camp have also been on the Sony system. One bit of information did draw a buzz from an other wise reserved crowd. Announced was the fact that Tekken 7 would be coming to Playstation VR.

Gran Turismo sped onto stage but mostly just leaving fumes of burned up gas with little to no information. All we could gather is the new title will be named Gran Turismo Sport but not much else was revealed about the title at this juncture. We will see the release of a beta which is scheduled in early 2016. Hopefully before then we get a better glimpse of a game that has left rubber in many a racing game fans hearts.

Please keep your arms and legs inside the vehicle at all times as we continue to kick the racing games into Drive. Speaking of Drive, Evolution Studios officially announced DriveClub: Bikes. In this new stand alone expansion you will be able to find robust features such as campaign mode, multiplayer racing and plenty of exotic brands to choose from. No need to down shift waiting for this title though because as soon as the conference had ended the title was parked ready for users to download.

Notably one of the more desirable and coveted titles also had a reveal of its own as the touted Killzone developer Guerrilla Games brought a new Horizon: Zero Dawn gameplay video. We are introduced to some of the game mechanics as well as the fantastic beast of Horizon: Zero Dawn. Collection of resources is essential to further your adventure, we see how the player takes a pack mentality of a rather docile herbivore type dinosaur to drive the beasts to their death. As the clip ends we get a chance to check out one of the other not so friendly predators looking for its next meal. A T-Rex is scary alone now imagine a mechanized armed T-Rex with few weak spots to fell the giant monster. Combing many elements such as shooter, rpg and a crafting game Horizon is shaping up to be an amazing game. Sony fans are lucky as this is a Playstation exclusive title.

Wild, a title from Rayman creator Michel Ancel, has been pretty absent from the major game shows since announcement in August 2014. Wild may be the name of the game but the concept could also be labeled as such. You as the player takes control of a Shaman, who then can control wild animals inside the game. In taking control of these animals you can use them to complete many different tasks. In the trailer we see an eagle being used to grab up some snakes for a mission. Travel can be slow by foot so why not grab up a bear to get across the map in half the time. As a mount the bear can be used to travel, but can also be a powerful weapon. We are welcomed to using the bear as a method of attack to clear out enemies, only after sneaking in with a rabbit does the player take control of a flock of ravens which the player then controls to cause some confusion to the enemy camp thus making the fight easier. One unique aspect of the game is the control of animals but as a human your body is still vulnerable to attacks so you must protect it as to not lose your own life while trying to save another. Wild is shaping up to be a game that looks very open world as well as unique.

David Cage introduced Detroit: Become Human, a Quantic Dreams working title. If you have never played Heavy Rain, another well known Quantic Dreams title stop reading now and go find a PS3 and a copy of the game. You will thank me later for sure as Heavy Rain was one of the must play titles of the last generation of gaming systems. Detroit: Become Human shows off a world completely dependent on robot slaves. As the trailer starts we are introduced to a robot who quickly realizes their is more to a manufactured life than just being. As she walks into the world she gains new emotions, thoughts and feelings. No longer wanting to be part of the same system that has so long trapped others like her. Being a Quantic Dreams title we can expect some great gameplay as well as story lines. Keep an eye out for more from Detroit: Become Human as time goes on hopefully we will see some actual in game footage and not just a pre-rendered video.

One of the more ambitious presentations had to be Dreams, a new title by the famed Media Molecule creators of Little Big Planet. Much akin to Little Big Planet Dreams is a very open title with much of the creation and story driven elements coming from the creator themselves. Players will be able to craft levels from scratch with no preset assets meaning they can let their imagination run wild. Imps are the little character sprites that players will control becoming their creators and face inside the world of Dreams. Imps will also be lip synced to a players voice. As players enter the world they are allowed to create, destroy and enjoy a level on the fly with no required steps to do so. Imps can also take control of characters inside the game adding in another separate dynamic. After watching the video posted below, I must say that Dreams will for sure be one of the titles I am sure to pick up. It is my hopes that the ambitions and fun of the trailer transfers to the actual game when it does finally release.

Two indie titles also graced the stage one more well known and one a bit less known. No doubt both look like they will be front runners in the best indie title run, both games look impressive as well as unique.

Boundless is a Minecraft-esque game which lets players traverse new worlds then you can spread different cultures, creatures and creations through each one. Boundless look to be a title that will follow in the steps of Minecraft but be different and unique enough that it can stand on its own two legs.

Even if you are not a fan of games or have not been following the gaming trends you more than likely have heard of No Mans Sky, a break out in the indie game field. No Man’s Sky will offer up space exploration in infinite corners of space. Each time a procedural generated level will be different allowing players to never play the same thing twice in theory. Salivating does not even begin to explain the amount of drool over this game *Empties 5 gallon drool bucket* this game looks beautiful not only in style but also concept. Will be exciting to see how well the game pulls off the procedural levels along with the open world that will be No Mans Sky.

OH MY GOD UNCHARTED 4, okay, sorry, now that is out of the way, Naughty Dog did not disappoint at the Paris Game Show bringing some great Multiplayer video to the stage. Multiplayer will be donned with the characters we know and love as well as some awesome powers in the form of Relics. Drake, Sully and the others from the single player story will be in full form with wise cracks and jokes. Once you finish the single player you should jump into the multiplayer, or hell skip the single player at first and jump into the Multiplayer first. If you have played any of the other Uncharted games this one looks to tie up the series and add onto the ever growing story of Nathan Drake.

Personally all of the news/reveals plus the presence of some of the new and well known games has seriously got me ready for 2016. Though my wallet wont be thanking me I am sure my gaming side will be elated for all that is to come. Now that the Paris Game Show has wrapped up for Sony what can we expect from the future? Are you excited for any of these titles? Will you yourself be picking up any of them? Let us know in the comments if you were hoping for more news from another of your favorite titles that was not present.