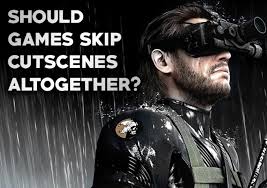 We all experience it when playing single-player games. After starting the console, we wait for a minute for the machine to load the game. Then, a few seconds to find our save file. After that, the game will take another minute to load. And, after a few minutes of game play, we’ll see a cutscene in the game. Seeing cutscenes is all well and good if you’re playing the game for the first time. But what if it’s your 10th time and you want to skip it and just continue on with the game play?

Cutscenes that can’t be skipped can be very annoying. So annoying that sometimes, it makes players want to throw the controller on the ground and go on a rampage.

The better the quality of the game, the more data it requires to run. This is why some PlayStation 4 games take a really long time to load. Have you played Dragon Age: Inquisition using a PS4? Madness. Each loading time takes about 2 full minutes. While the loading scenes are understandable since they’re imperative for the game to play properly, it just doesn’t make sense for game developers to not include a skip cutscene option in some parts of a single-player game.

Heck, even online games have a skip cutscene option, and that is online game play where people share their experience with others. Unfortunately, single-player games like Second Son require their players to re-watch all of the cutscenes that you’ve already seen millions of times.

There are, however, cases where not being able to skip cutscenes is ok. There’s Resident Evil 5 which uses cutscenes as part of the game play where people need to press specific buttons or else they’ll instantly die. While using cutscenes in the actual game play is great, using them to hide long loading times isn’t. Second Son’s developer admitted to the fact that the cutscenes are being used to hide long loading backgrounds.

Console developers should keep in mind that mobile gaming is gaining ground on gaming sales with millions playing via their phones everyday. Gaming Realms, a software developer that makes online games, asserts that there has been a huge shift in demand from traditional computing devices to mobile thanks to the latter’s advancements when it comes to connectivity. Mobile games don’t take a long time to load, and their cutscenes can be skipped, making them the preferred option for people with busy schedules or simply those who have no time to wait for 2-minute cutscenes to finish. Gamers today want everything fast, and console developers will have to adapt to the demands otherwise they could lose their grasp on the market faster than they think.