World Wrestling Entertainment is on the Road to Wrestlemania, but at Proven Gamer, we’re on the road to Trophy Whores 300.  It’s hard to believe that an independently owned podcast could survive (and thrive!) for 300 episodes, but we know that the best days are ahead.  We’re glad that you’re along for the ride!

Shots have been fired, and the smack talk between the Trophy Whores and the Remember the Loot crew has intensified.  Clearly, the Loot crew doesn’t remember what happened during the Great Trophy War of 2016.  In short, the Trophy Whores swept the competition, blasting the doors off of the Loot’s rickety ship.  Tensions are bound to elevate; however, the Trophy Whores are confident that they can notch a second victory against their rival podcast — even with shooter games involved.

In a bit of big, big news, Trophy Whores has been approved for iHeartRadio, which greatly expands the show’s footprint and reach. It’s a tremendous honor for the show to be part of iHeartRadio’s massive and respected community, and Proven Gamer have only the fans to thank for pushing the podcast to this point.  The Trophy Whores work hard to put out a quality weekly show, but they owe so much love to their listeners, who keep the show strong and growing.

Join the Trophy Whores as they discuss, among other things, The Deadly Tower of Monsters, Street Fighter V, and Injustice 2. 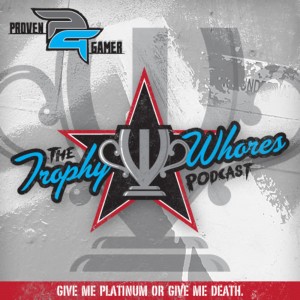