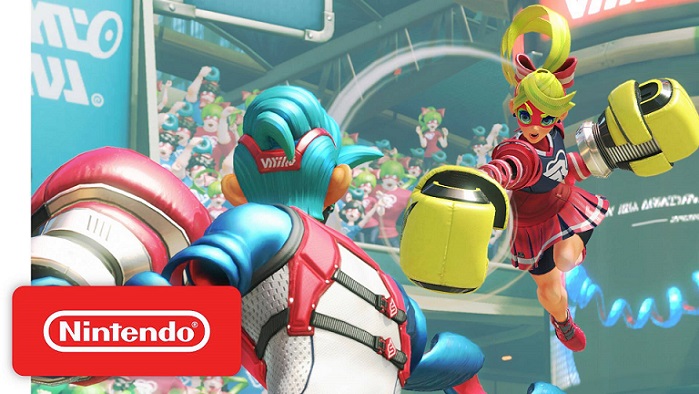 As we gear up for week two of the ARMS Global Test Punch this evening, I want to revisit last week’s and share some thoughts. Prior to release, game developers often stress-test their servers; however, with ARMS being a fighting game, one might assume that some balancing is in order.  Overall, the experience has been better than expected, but there are certainly problems that need to be addressed.

The first thing you need to know about ARMS: It is a blast to play. Week one had some 1V1, 2V2, and 1v1v1 matches, with some 1v1 v-ball matches sprinkled in, so players had plenty of chances to try out different characters in various match types. Fighting is pretty simple — yet has some deep systems hidden beneath the surface. To punch, you press either the shoulder or face buttons. You use the analog sticks to curve your fists into your opponents face-hole. I didn’t dabble with motion controls during week one.

The button controls respond perfectly, and your flailing arms go exactly where you want them to. Movement feels great, too. My favorite character was Ninjara, due to his unique ability to pop smoke and shift side-to-side to evade attacks. This was about the only way to avoid getting grabbed, which is by far the worth mechanic in the game.

To grab, you press both attack buttons (at once). You can try to dodge a grab, or punch one away, but if you are caught in one, it is entirely too easy to keep grabbing the same character over and over again. In one match, I tossed to the ground and grabbed as my character was getting to his feet.  I got caught in a loop of throws that lasted seven tosses. It was enough to kill me and tick me off to the point of incoherent mumbling. Nintendo need to fix and balance this — other than slowing down the grab motion.  Perhaps they can incorporate a 3-5 second timer after executing a grab. Just a thought.

V-ball was fun to play; however, Nintendo didn’t provide much explanation of how to pull off fancier shots.  I won my first match, without difficulty, but my second opponent was able to hit the ball and make it hang in the air and spin. When the ball came over to my side, it spun so much that my punches would make it fly all over the place. I couldn’t figure out how to do this — but it didn’t take away from how fun the mode can be.

Overall I was impressed with the level of polish. I can’t say I am surprised, but I am left with a sense of wonderment, as another Nintendo IP seems to be of incredibly high quality. The permutations you can have with fighters and arm types is exciting, and I can’t wait to test out the power types and other game modes. This testpunch has made this a must-play for me.

If you wish, you can download episode 2 here – Nintendo Duel Screens 2 – The Forgotten Hype Zone