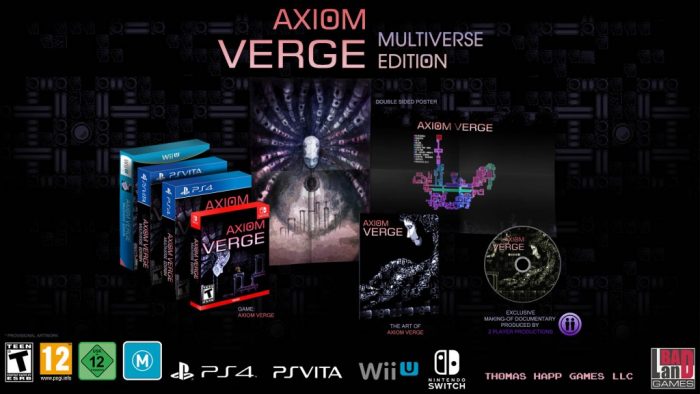 According to a press release today, Axiom Verge will be joining the Nintendo Switch line up very soon with a special edition called Axiom Verge: Multiverse Edition. See the press release and trailer below:

MADRID – June 08, 2017 – Retro gaming goes on the move as BadLand Games and Thomas Happ Games are excited to announce that they will be bringing the critically acclaimed Axiom Verge: Multiverse Edition to the Nintendo Switch™ alongside the Wii U™, PlayStation®4 and PlayStation®Vita.

Watch the brand-new announcement trailer below.

The Axiom Verge: Multiverse Edition will include a plethora of creative and nostalgic in-box content that will please any die hard fan or newcomer to the award-winning Metroidvania title.

This includes a specially commissioned and exclusive 2 Player Productions documentary about Thomas Happ and the making of Axiom Verge. The Multiverse Edition will also feature a copy of the game, a deluxe booklet with developer commentary and art, along with a double-sided poster, plus if you pre-order before release you will receive the atmospheric CD soundtrack as well*.

2 Player Productions, known for Minecraft: The Story of Mojang, Double Fine Adventure!, and the Amnesia Fortnight documentaries, spent quality time with Thomas Happ to create a singular and emotive behind-the-scenes account for fans. This documentary addresses topics such as the development process of the 5-year solo production, the games that inspired Axiom Verge, and the challenges of balancing his game development career and the need to care for his son with special needs.

“People often asked me about the early days of Axiom Verge – about how I was able to make a game completely on my own over the course of 5 years of evenings and weekends while holding down a full time job,” says developer Thomas Happ. “The long form documentary format really made it possible for me to take the time and explain that process as well as go into some detail about the difficulties of balancing work and family responsibilities.”

“This has been a dream project for us,” says Paul Levering, Producer, 2 Player Productions. “A level of access like this is rarely seen in making-of documentaries about entertainment properties – particularly with video games. We’re immensely grateful to Thomas Happ Games and BadLand Games for making our documentary a cornerstone of the Multiverse Edition.”

“We’re proud to be working with 2 Player Productions on making Axiom Verge: Multiverse Edition an even more valuable collector’s item with the inclusion of this unprecedented look into the life of a renowned indie developer,”  says Luis Quintáns, CEO of BadLand Games. “We’re also pleased to confirm that the Multiverse Edition will be making its way to the Nintendo Switch. After fielding questions from the player community for some time now, it feels great to finally go public with this exciting news.”

The World of Axiom Verge:

After a lab accident, Trace awakens on the mysterious alien world of Sudra. Unsure if he has been beamed to a distant planet or the far future or trapped in an elaborate computer simulation, Trace begins his quest to defeat the ominous being known as Athetos and uncover the secrets of Sudra.

Speedrun mode: Play with a streamlined interface and additional features.

Inside the Multiverse Edition:

Axiom Verge: Multiverse Edition will be available on PlayStation 4, PlayStation Vita, Wii U and Nintendo Switch, in August 2017.

*Pre-Order:
The Soundtrack CD will be offered as a pre-order incentive for all editions (the Multiverse Edition on the Nintendo Switch will also include it in the package). Pre-orders will be available shortly at retailers and e-tailers worldwide.