“So what’s your game about?”, I asked the representative of Chainsawesome Games as I observed a bit of gameplay from a distance.

I stood there with a perplexed look on my face. Before I even had time to mull over the ridiculousness of the developer’s sales pitch, I asked him to strap me in cause I wanted to see if what he was selling was as fun as it sounded. I can safely say Aftercharge not only met my expectations, but I could easily seeing it giving the likes of Rocket League a run for its money.

So let’s break this down: one team is invisible and the other team is invincible. One team is made-up of invisible robots whose primary goal is to sabotage six glowing tubes known as Energy Extractors located throughout the map. Successfully destroy all six and your team is victorious. Sounds simple right? Of course it does – you’re invisible for crying out loud! Well, it’s not so cut and dry. Striking one of your luminous objectives causes your cloaking device to stop functioning, thus revealing you to your indestructible adversary – the enforcers. 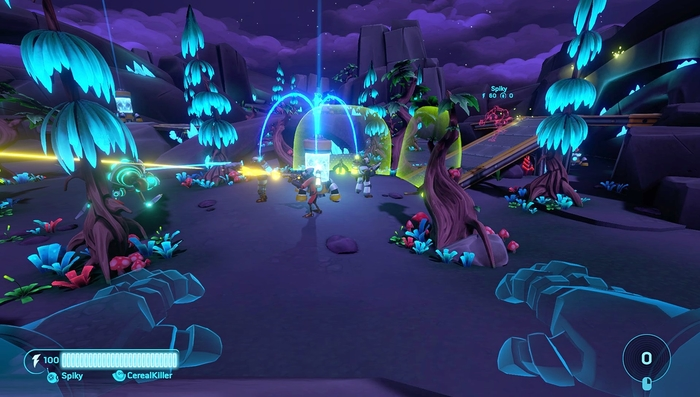 Now, as an enforcer, your objective is to track down those bothersome robots. Only after you have dropped all three robots (and keep them down) does that translate to absolute victory for the enforcer. Again, how hard can that be, right? If you simply camp the Energy Extractors then surely you can just obliterate those robots and call it a day. Especially if you make use of your tracking device – it’s barely even a competition! Not so fast there, chief. Did I mention that the robot team can revive fallen comrades? And you thought that it was going to be easy.

Aftercharge is very manipulative by means of how it appears and initially plays. Both sides seem to play easier than they actually are. As a robot, you need to shed a lot of what most online FPS titles teach you; a run-and-gun approach does not work here. You need to temper that inherent desire to blindly bash everything and everyone around you for a more coordinated tactic. It’s all about patience and communicating with your teammates to find the perfect chance pull a fast one over on the opposing team. Conversely, there is just as much planning and coordination that goes into playing as an enforcer. Between keeping an eye on the Energy Extractors and keeping robots down, things can get dicey in a hurry – especially when you factor in how quickly robots can revive one another. 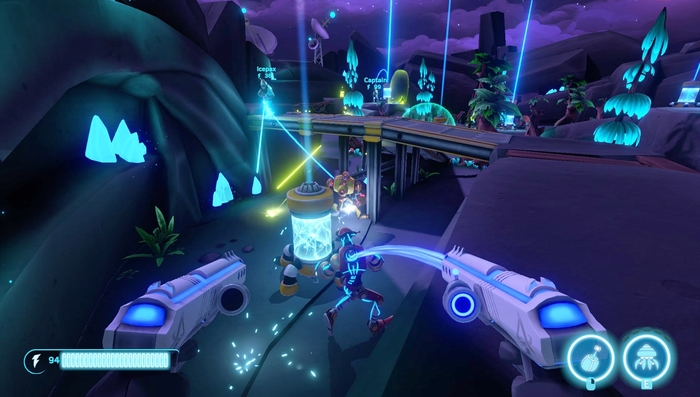 For a game with such a simple objectives, I was surprised by the level of depth of each side’s gameplay mechanics. There is a lot of strategy to be found in a set-up like this and all of it hinges entirely on communication. I’ll be the first to admit that I’m terrible at online first-person shooters. So much so that I won’t even use a microphone – I’ll just do my own thing and my team be damned. But the cut-and-dry nature of Aftercharge, coupled with how rapid-fire each of the rounds were (seriously, it took me longer to strap on my headset than it did to finish a match) really lends to the accessibility of it. Suddenly I wasn’t so concerned with performing well – I was simply having too much fun to care. It also helps that game controls like a dream and has got a neon-glow TRON-ish vibe going on that I was completely into.

Aftercharge is set to launch Summer 2018 on PC, Xbox One and the Nintendo Switch (YES!!). Chainsawesome Games mentioned to me that Cross-Play will be a thing between all platforms and that there will likely be beta in July A price point hasn’t been set but the developer is considering a $19.99 price point.