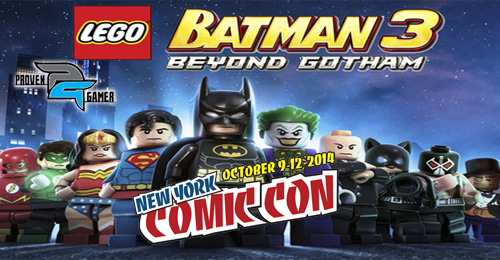 New York Comic Con was a little shy on the video game announcements this year, but that did not stop the Lego Batman 3 panel from being riddled with some fun information.With the help of IGN’s Greg Miller moderating TT Games developers, Arthur Parsons and Stephen Sharples (Dang it Sharples!) showed off in-game footage of playable characters like the comic book icon and CCO of DC Comics, Geoff Johns. However, the popular filmmaker and star of Comic Book Men, Kevin Smith, does not get left behind. Some of the biggest NYCC-exclusive characters reveals include the popular Darkest Knight Batman which is an iteration where Bruce Wayne is chosen to become a Green Lantern, fan-requested Solar Suit Superman, the always ironic Man-Bat, the obscure inclusion from the Batman animated series Condiment King, and of course the Warner Brothers-backed Green Loontern which features the iconic Daffy Duck donning a Green Lantern suit. Even the real-life character inclusion of Conan O’ Brien makes sense in world of Lego Batman 3: Beyond Gotham, but that is not all that was announced at NYCC.

The biggest reveal came when the game’s developers brought out Arrow’s Stephen Amell poised to voice Oliver Queen/Green Arrow in the game and announce the “Arrow” DLC Pack based on the hit show. The Arrow DLC pack is the fourth announced DLC Pack that will be included in the season pass. TT Games detailed their season pass which includes 6 DLC Packs that in total has 40 playable characters for just $14.99. Each pack includes a unique level, characters, vehicles, and achievements. Lego Batman 3’s first 3 DLC Packs will be available on 11/11 the same day the game releases. The first wave of DLC includes the previously announced “Man of Steel” Pack, the “Dark Knight” Pack, and the “Batman 75th Anniversary” Pack.

The third iteration in the Lego Batman franchise is well on track to be the most diverse and expansive game to date. Taking Batman into space and facing off with the evil Brainiac, planet-hopping adventures provided by the Lantern worlds,and the magnitude of available characters provides the player with the signature Lego feel, fun exploration gameplay. The DLC Packs also add something new to the franchise. They bring obscure and movie-based variations of DC characters, with this the game tries to appeal to and appease DC fans from all walks of life. From the comic-book fan to a casual movie-goer, all will find something to relate to in Lego Batman 3. This Lego adventure builds its way towards players on November 11th.