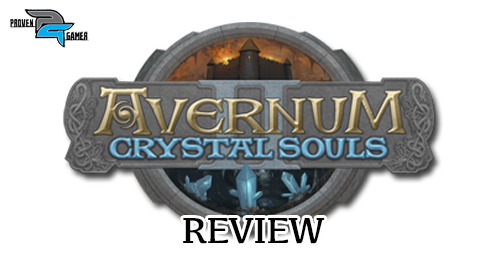 Having not played the predecessor of Avernum 2 Crystal Souls, I went into this game without any real expectations. It is a TBS, RPG indie game. Initially I had thought that it would be similar to a watered down version of Final Fantasy, but that was not the case.

Avernum 2 Crystal Souls takes place in a world ruled by an empire called… the Empire. All political prisoners, or any the Empire feel like getting rid of, are thrown down towards the Earth’s core. This underground system of caves is called Avernum. Before this game, a group from Avernum managed to assassinate the Emperor of the Empire. Now, the Empire is attacking Avernum to purge all inhabitants when magical barriers appeared keeping either side from progressing. You, and three other random assortments of followers, are simple recruits who must rise to the occasion and save Avernum.

Like most indie games, I had thought that it would be a short game with a simple story that is relatively easy to get through, but that is not the case. This game is pretty massive. The story can also be complex along with many NPC’s that you can converse with giving their point of views on the world of Avernum 2. This seems like positive, but it turns into a negative when you add in the fact that there is next to no voice acting. Every little thing that happens and every conversation is walls of text that you have to read through. Story telling is one of my favorite aspects of video games, but it got tiresome of reading bulk after bulk of texts. It started to feel like a text-based RPG.

The fighting system was interesting. It is turn-based and the character you control moves a certain amount of spaces within a grid and attacks enemies based on their respective classes abilities and weapons. I’ve seen this type of fighting done well in many games like Omerta, but I feel that the problem comes with how many abilities each class is given. Magic users get 22 abilities and warrior classes get 12. With it being a turn-based game, taking time to choose your ability is not an issue but it is still at a level that is both overwhelming and somewhat over powered. It takes time and a decent amount of strategy to decide on what abilities to level up and use.

On a more positive note, this game is quite large. There are plenty of towns to explore as well as forts and dungeons. The landscape changes enough to keep the player interested in the surroundings. A wide selection of items can be found throughout the game which gives an interesting dynamic. Not all items are useful, such as buckets or spades, but it is nice that they put in the effort to allow you to pick things up that you see around you.

Avernum 2 Crystal Souls was not the most entertaining game that I have reviewed. The walls of text and slow progression of the game really took a toll on how much I enjoyed playing it. That being said, it is easy to see where the effort was put in on this game and it can definitely be seen as an achievement for any indie developer.