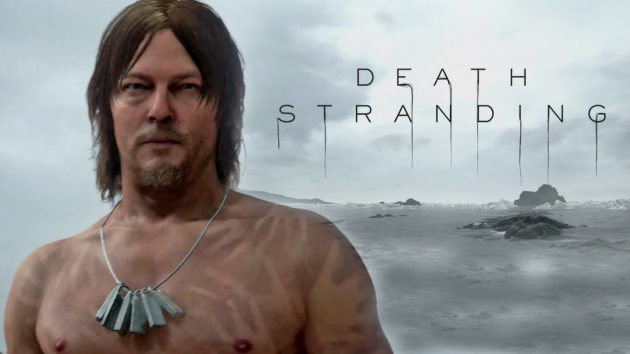 Monday’s press conference by Sony at E3 revealed a strong lineup of games that are coming, and favorites that are returning. As Andy House stood on stage talking about Sony’s mission to make Playstation “the best place to play for gamers,” he asked the audience to welcome one of the “most creative talents in the history of gaming.” The lights went down, and the audience received one hell of an entrance from Hideo Kojima, including the words, “I’m back,” which resulted in the crowd’s roar. After a brief explanation that it was a new project that he had made for them, Kojima gave us our first introduction to Death Stranding.

The trailer opens with an excerpt from Auguries of Innocence by William Blake, followed by imagery of dead crabs and other sea creatures. We then get our first look at the star of this game – Norman Reedus – who is naked on this dead beach, and somehow attached to an infant by what one can only assume is an electrical umbilical cord. When Reedus stands up, we see scars on his stomach that resemble a crucifix, and later see him staring over the expanse of the “dead beach,” where there are five figures in the sky.

Other than this trailer and the fact that Reedus is still working with Kojima after the abandonment of the Silent Hill projects, not much else is known about Death Stranding and what it will entail. Death Stranding will honor the pledge that Kojima made during a partnership agreement back in December, where he said he would make a PS4 exclusive.

No release date has been set yet, but we look forward to more information on this haunting title in the future.