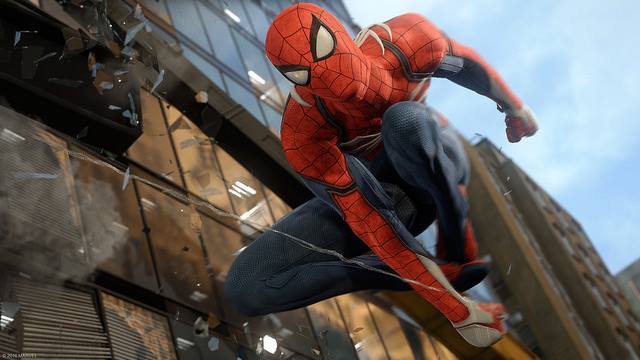 Insomniac Games, who are no stranger to fantastic action games, are developing a new Spider-Man game, and it will be exclusive to the PlayStation 4. Sony revealed the reveal trailer during its E3 press conference.  The game looks gorgeous, which is exactly what we have come to expect from Insomniac, developers of the visually stunning Ratchet & Clank games.

Sony has grabbed a win; Insomniac’s Spider-Man is a fantastic exclusive game for Sony’s PlayStation 4.  Best of all, PlayStation 4 owners win, too.  Insomniac, a fan-favorite development studio, has served as the brains behind the creation of Spyro the Dragon, Ratchet & Clank, Resistance and Sunset Overdrive.  Sunset Overdrive has drawn comparisons to Sucker Punch’s inFamous series, which challenges players with using superpowers for either good or evil.  Insomniac often provides players with larger-than-life abilities, and I know that they can make an amazing Spider-Man experience.  What’s more, Insomniac are admitted Spider-Man and Marvel fans, so the masked, web-slinging New Yorker is in good hands.

While Naughty Dog has earned the privilege to be called the best developer in video games, by myself and the rest of the Trophy Whores, Insomniac has show over their 22-year history that they make incredible games.  Based on what I have seen so far, I expect nothing less than an incredible Spider-Man game.

Sony Computer Entertainment owns the video and picture content used in this article.