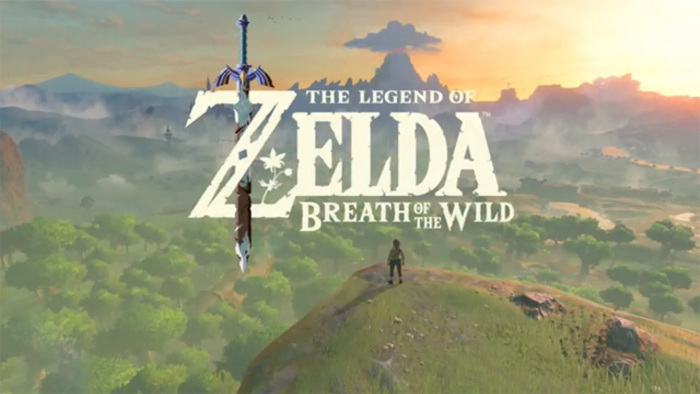 Nintendo did not have a conference at this year’s E3, but that did not stop them from presenting what may be one of the most anticipated games of 2017.  On Tuesday, June 14th, we were shown a trailer for the new upcoming Zelda title, The Legend of Zelda: Breath of the Wild followed by an entire day show casing various gameplay elements the game has to offer.  The trailer begins with a mysterious female voice uttering the words “Open your eyes”, followed by panoramic views of the game’s setting, presumably Hyrule at this point, but is yet to be determined.  This game is gorgeous.  With an art style favoring a hybrid of Wind Waker and Skyward Sword on a next-gen level, the worlds beauty really comes to life in it’s lush, colorful ambience.  Everything from the sun setting behind a mountaintop casting the shadow of the giant walking it’s cliffs, to the ripples of a lake as ducks peaceful bathe in it, I was immediately in awe at this new vision for Hyrule.  I also noticed some familiar scenery which has Link traveling in a desert, much like the Gerudo Desert in previous installments, as well Link scaling a snowy mountainside in search of a dungeon.  “After Skyward Sword, we needed to develop a bigger world.” stated Eiji Aonuma, lead director for Breath of the Wild.  Landscapes in Skyward Sword seemed very bland, and uninteresting, so it is to no surprise that Aonuma-san wanted to create a bigger, better, and more beautiful world, and from what can be seen so far, they are sure to deliver. 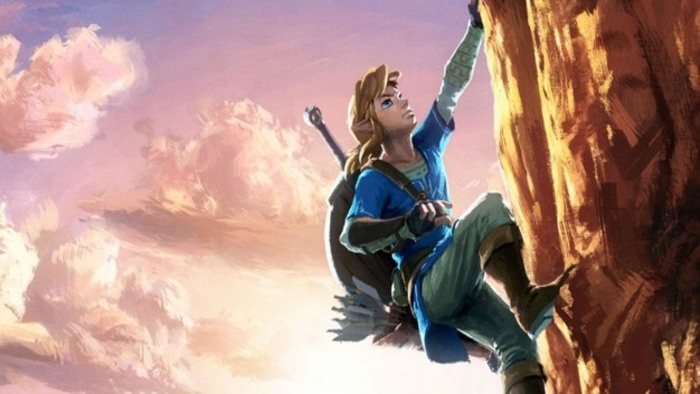 Gameplay mechanics hold true to what has made Zelda a fun and engaging experience for it’s fans but is now accompanied by upgraded features that aim to engender the interests of players unfamiliar with the franchise. Link has kept his sprinting mechanic familiar in Skyward Sword, but has now also been equipped with the ability to jump, as previous titles only limited the hero of time to merely running to the edge of a platform or cliff before performing his jump animation.  Paired with his newly acquired jump ability, Link can also climb his surroundings.  A stamina bar displays on the screen as our hero can climb trees for higher vantage points, or scale mountains in search of hidden caves or dungeons to explore.  Although it is unclear at this time, it has been speculated that the player can upgrade Link’s stamina bar to further increase the expanse of his environment which he can climb. 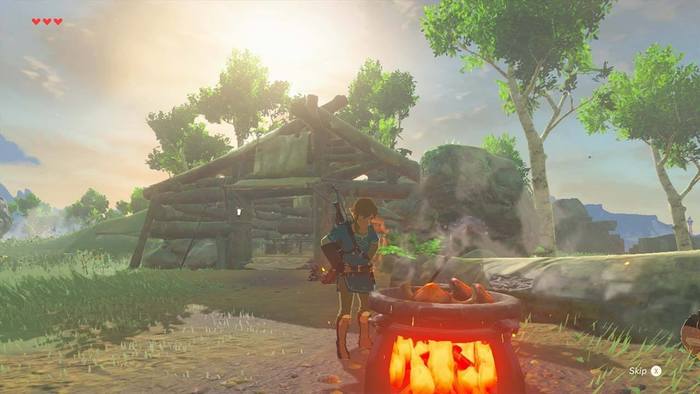 A crafting (or cooking) mechanic has been added, as shown in the trailer, which features Link adding items to a cauldron in attempt to concoct various items to aid him in his journey via searching local enemy camps or hunting a wild boar with his trusty bow and arrow.  One item which was show cased during the demo was a piece of meat which was cooked and provided the player with not only a health recharge, but a health boost which will most certainly come in handy before encountering a difficult enemy or boss.  It will be interesting to see what sort of items can be created using this mechanic.  Perhaps an attack or defense boost, or maybe a stamina boost which allows you to climb and sprint for longer durations.

Weapons and armor play an important role in this game as well.  One of the biggest eye sores of the trailer reveals Link not wearing his iconic green tunic.  This caused quite a bit of conjecture among fans of the series, for many assumed the protagonist in this particular entry was not going to be Link, but that theory has since been debunked.  In lieu of Link’s green tunic, we see him wearing a blue tunic like top with brownish cloth pants similar to what he wore in Skyward Sword.  These items can be removed at any point in the game if the player so chooses and can later be replaced by what looks like stronger armor for Link to defend himself against enemy blows.  Maybe the legendary green tunic is an item which can be found later in the game?
Many of the weapons found in the demo seem to have a durability mechanic in which the weapons weaken over time and causes the player to discard items either through the options menu or by hurling them at your opponent for some extra damage before equipping or finding your next means of defense.  It will be interesting to see how this mechanic plays a role in crafting and the longevity of one weapon versus the other. 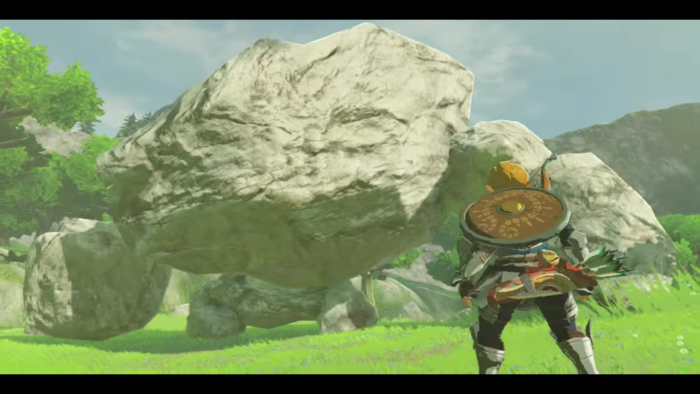 The landscape is plentiful and that is an understatement.  The sheer size of this game is huge.  The map shown in the demo rivaled that of most open world titles such as Rockstar’s Grand Theft Auto, which is a very bold approach, and unlike anything we have seen from Nintendo to date. Players can add beacons on their map to help guide them to new locations, or serve as reminders to revisit an area for further exploration.  At one point in the demo, a beacon is placed in a distant part of the map, and Link is shown parachuting off of a cliff hundreds of feet above the tree lines towards his destination all in real time.  Upon landing on the ground, Link then ventures inside an archaic yet unworldly structure in pursuit of treasure to aid him on his quest.

Zelda: BotW will redirect itself from more linear titles such as Zelda: The Ocarina of Time and return to it’s exploration roots which made the original so memorable.  Players can create their own adventure in this open, sand box Hyrule instead of having their hands held by an annoying fairy. Sorry, Navi.    Eiji Aonuma recently stated “Our mission in developing this new Zelda game for Wii U is quite plainly to re-think the conventions of Zelda. I’m referring to the expectation that the player is supposed to complete dungeons in a certain order, or that you’re supposed to play by yourself. The things we’ve come to take for granted recently. We want to set aside these conventions, get back to basics, and create a newborn Zelda so that the players can best enjoy the real essence of the franchise.”

Zelda has meant so much to the gaming industry and to fans all over the world (and even to myself personally), so it is a breath of fresh air to see this game reimagined into what it is becoming.  There is so much to do and explore, and fans are waiting in anticipation to get their hands on the game, but unfortunately we will have to wait until it releases on the Wii U and presumably the Nintendo “NX” in March of 2017.  Be sure to view the trailer below and for more on The Legend of Zelda: Breath of the Wild, keep it locked right here at ProvenGamer.com