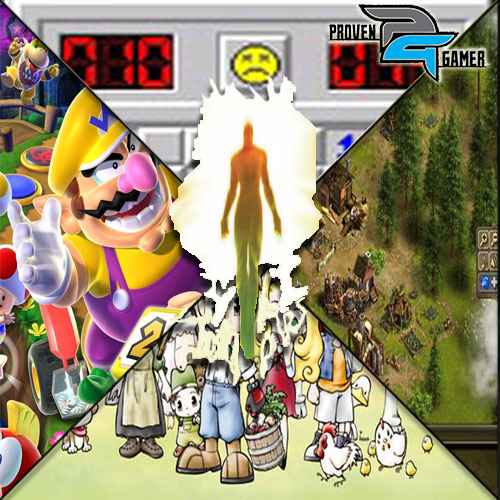 We all have them. Maybe it was a childhood game or one that you are just exceptionally good at. No one you know likes the game or they may even tease you for playing it, but that never made it any less fun. These are my top five games that I know are terrible, but I love playing them anyway.

For those who missed this game nearly a decade ago, Advent Rising is a sci-fi shooter with, in my opinion, a very entertaining story. To sum it up quickly, you are a space pilot encountering your first alien contact, they inform you that humans are gods, another race of aliens appear, and BOOM you are one of the last two humans in existence. You spend the game learning human-god abilities and taking down alien bad guys.

Why it’s Bad: The powers render the guns in the game completely obsolete when you upgrade them. At the same time, you upgrade a power by using it and one blasting ability turns into an all-powerful Kamehameha wave.

Why it’s Awesome: The story is pretty awesome, which is not very common. Also… uh… oh! FREAKING KAMEHAMEHA WAVES! Seriously, you can one-shot spaceships with that thing! Ending entire waves of enemies in an instant, Goku style; how could that not be awesome?

There are many versions of this game, and there will probably be many more, but they all have the same basic concept so I’m lumping them together. It’s basically a board game where the players move around the board and play mini-games to earn coins. The coins are used to buy items and stars, and the player with the most stars wins.

Why it’s Bad: The same reason that I am lumping Mario Party games together is one of the major flaws of the series. There may be more than ten games in the series (counting handheld games) but it is difficult to discern one from another as they are so similar. It’s the same game over and over. Also the series of Mario Party is quite firmly in the genre of “casual games” with no real incentive to play the whole game.

Why it’s Awesome: There is nothing quite like the face of utter defeat on any opponent children’s faces; perhaps an annoying cousin, or younger sibling. They can’t exactly play Halo or other similar games so just break out the Mario Party game and let the passive aggressivism flow through you.

Harvest Moon is a series of games in which your character starts up a farm and raises crops and animals for money. You can upgrade equipment, mine, fish, and other things as well. There is also a story to follow which usually involves a scavenger of crops, food, or other things that can only be obtained in a certain season. There’s also the option to marry and have kids.

Why it’s Bad: Simply put, Harvest moon is very repetitive and stressful. You have to water your plants. Then care for your animals. Crap, you left your tool in the house. Now that’s done maybe I’ll fish. Day is done, bed time. Now water the crops… How did three hours just pass by?!

Why it’s Awesome: Have you ever had those hard or depressing days and you just don’t feel like playing an annoying shooter or a game with the difficulty of “1/4 of a level costs at least 20 of your lives” (I’m looking at you Dark Souls), Harvest Moon is the perfect casual game. There’s not a lot of action, your character doesn’t die, you spending the day petting a cow; the simple videogame life. The fact that I’m sucker for business-type, buying and selling games might also play into this.

Those free games on the internet, contained on hundreds of websites; Shooters, RPGs, launching, upgrades, and a plethora of other genres flood the internet from established and aspiring videogame creators. You can find everything from fighting zombies to playing a puzzle online.

Why it’s Bad: A good 90% of the games out there are really not worth playing. After many hours roaming the internet for games to play I can say that the vast majority are flawed, bugged, too short, don’t make sense, or are not entertaining at all. It’s a sea of crappy games that drowns your time away.

Why it’s Awesome: The other 10% are what makes up for the rest. I’ve had more fun playing a few hours of a good browser game then I have from playing a 60 dollar over the counter game for weeks. A lot of the browser games offer comedic moments that can’t really be found elsewhere.

This game is on almost every computer everywhere and has been for a very long time. It’s the classic puzzle game where numbers show you how many mines are adjacent to a space. Theoretically, it is very simple; but it turns out to be a lot harder than it sounds.

Why it’s Bad: This game has been around so long that it is often considered just a frustrating game to play if the internet and cable went out, your consoles exploded, all your books spontaneously combusted, and all other possible hobbies/time killers met their untimely demise at the same time. Also, a lot of the game depends on luck on the harder levels which can be extremely infuriating for those who are spending their time to try and solve it.

Why it’s Awesome: This game can be extremely relaxing when the player gets the hang of it. I have played this game for hours at a time, and sometimes still do, because it is numbingly distracting. However, while being relaxing, it still poses a challenge and so doesn’t become boring, at least not to me. It is one of those few games that finds a medium of relaxation and challenge that keeps me interested.