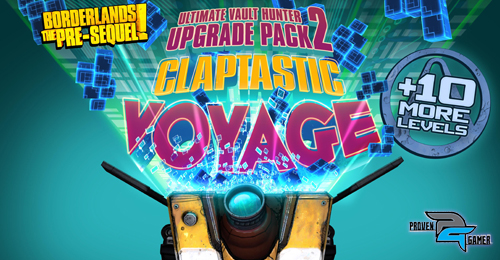 Borderlands: The Pre-Sequel just got a little bit better! Developer 2K Australia is adding a new campaign to its latest and greatest entitled “Claptastic Voyage” that will be available on March 24th, the studio and co-developer Gearbox Software announced today during a panel at PAX East 2015.

Claptastic Voyage focuses on Claptrap, and will serve as a bridge between The Pre-Sequel and Borderlands 2, said a developer from 2K Australia. Handsome Jack wants a powerful, mysterious item that’s hidden within Claptrap’s source code. So the Borderlands 2 villain digitizes the Vault Hunters and sends them into Claptrap’s mind, which is where the expansion takes place. Players will be “exploring the deepest recesses and furthest corners of Claptrap’s mind … his hopes, dreams and stupidity,” said 2K Australia.

The Claptastic Voyage add-on also includes Ultimate Vault Hunter Upgrade Pack 2. It will raise the level cap by 10 more levels to 70, and will give each character 10 more skill points to earn. Together, they form the fourth piece of DLC for the Borderlands: The Pre-Sequel season pass, which is available for $29.99. Players who don’t own the season pass can pick up Claptastic Voyage and Ultimate Vault Hunter Upgrade Pack 2 in one bundle for $9.99.